Williamson County Democrats and Friends
Let's get together Monday, August 7th at 6:30pm for Food, Drinks and Music 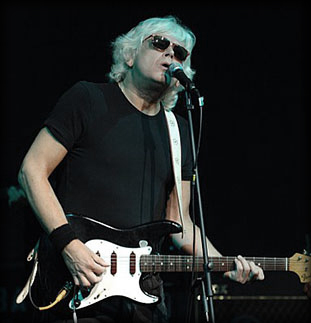 Walter is a musician, singer, composer, writer, artist, sculptor and general Renaissance man who is most widely known for his 1978 million-selling single record, "Magnet and Steel," featured on his album Not Shy (Columbia).

Almost three decades later, Walter's signature song is a staple on the radio, and can also be heard in feature films and on television. Meanwhile, he has continued to make original music as both a prolific individual artist, with a total of eight solo CDs to his credit, and as a member of performing and recording bands including the Malibooz and the Brooklyn Cowboys.

2002 was a year of noteworthy accomplishments for this enduring talent with the release of three new CDs: Apocalypso Now (Gaff Music), which showcases some of Walter's latest songs; Beach Access with the Malibooz (Pier Group Records), a classic surf music band that helped to pioneer the genre; and Dodging Bullets with the Brooklyn Cowboys (Leaps Recordings). The Meaning of Live, a compilation of Walter's live performances from 1978, has just been released, along with a CD that features all of the songs from Walter's first two Columbia LPs, Fundamental Roll and Not Shy. For information on how to obtain copies of the new CDs, please see below.

Today, Walter Egan continues to write, produce, and record new music (check out his two new songs in the MP3 downloads section below) and perform live around Nashville and nationally.

WalterEgan.com is Walter's official site. It is evolving and expanding, and includes announcements of his upcoming personal appearances.

MOJO Magazine proclaimed Byrd’s Auto Parts, Jon Byrd’s 2007 debut solo recording, “Americana the way it was and the way it should be.” MAVERICK Magazine declared Byrd’s 2011 follow-up Down At The Well Of Wishes “spellbinding, showcasing a true genius at work.” That same year Jon was a featured vocalist on the Red Beet Records Grammy-nominated I Love: Tom T. Hall’s Songs Of Fox Hollow, alongside Patty Griffin, Buddy Miller, Bobby Bare, and Tom T himself. R2 (Rock and Reel) Magazine described Jon’s next solo recording ROUTE 41 as “underpinned by sublime Country picking… Byrd’s warm, effortless vocals touch the emotional core of all he sings.” Another critic noted “traditional country performer, singer-songwriter Jon Byrd is one of the finest exponents of spit and sawdust country coming out of the East Nashville’s scene and beyond. … Hard core (and Americana) country fans need to check this guy out.”

Born in Birmingham, Alabama Jon Byrd grew up among the piney woods of south Alabama before becoming pivotal in Atlanta’s storied Redneck Underground music scene. Always a featured sideman, Jon’s first solo recording didn’t come along until after migrating to Music City over 15 years ago. DIRTY OL’ RIVER is Jon’s fourth solo album and harkens back to his first Auto Parts record: up-tempo country songs, lots of pedal steel, and some really strong country covers. Jon’s originals “I Get Lost” and “If Texas Is So Great” will be heard for years to come.