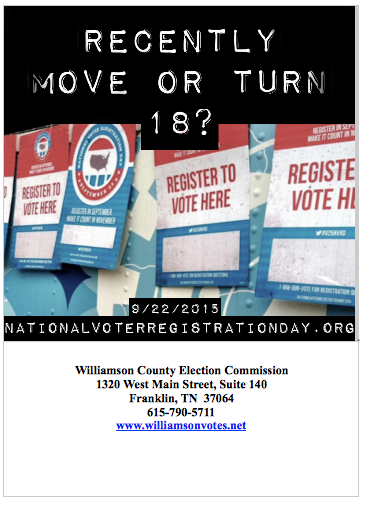 Chad Gray, Administrator of Elections for
Williamson County, is pleased to announce
September as National Voter Registration Month
in Tennessee and wishes to remind all of our
citizens of the importance of exercising their right
to vote.
“The citizens of Williamson County consistently
rank in the top three or four counties in Tennessee
in voter participation for Federal and State
elections and we want to continue that trend by
encouraging everyone to register to vote or change
their address in a timely manner to avoid any
problems when you go vote in the upcoming 2016
elections” says Gray.
The National Association of Secretaries of State
has declared Tuesday, September 22, 2015, as
National Voter Registration Day.
There are three elections currently scheduled next
year in Tennessee and Williamson County.  The
March 1, 2016, Presidential Preference
Primary/County Republican Primary Election, the
August 4, 2016, State Primary and County General
Election, and the November 8, 2016, State General
(Presidential) Election.  An individual must be
registered in their county of residence no later
than thirty (30) days before election day in order
to vote.
For more information, contact our office at
(615)790-5711 or visit our website at
www.williamsonvotes.net