Hate has no place in Williamson County 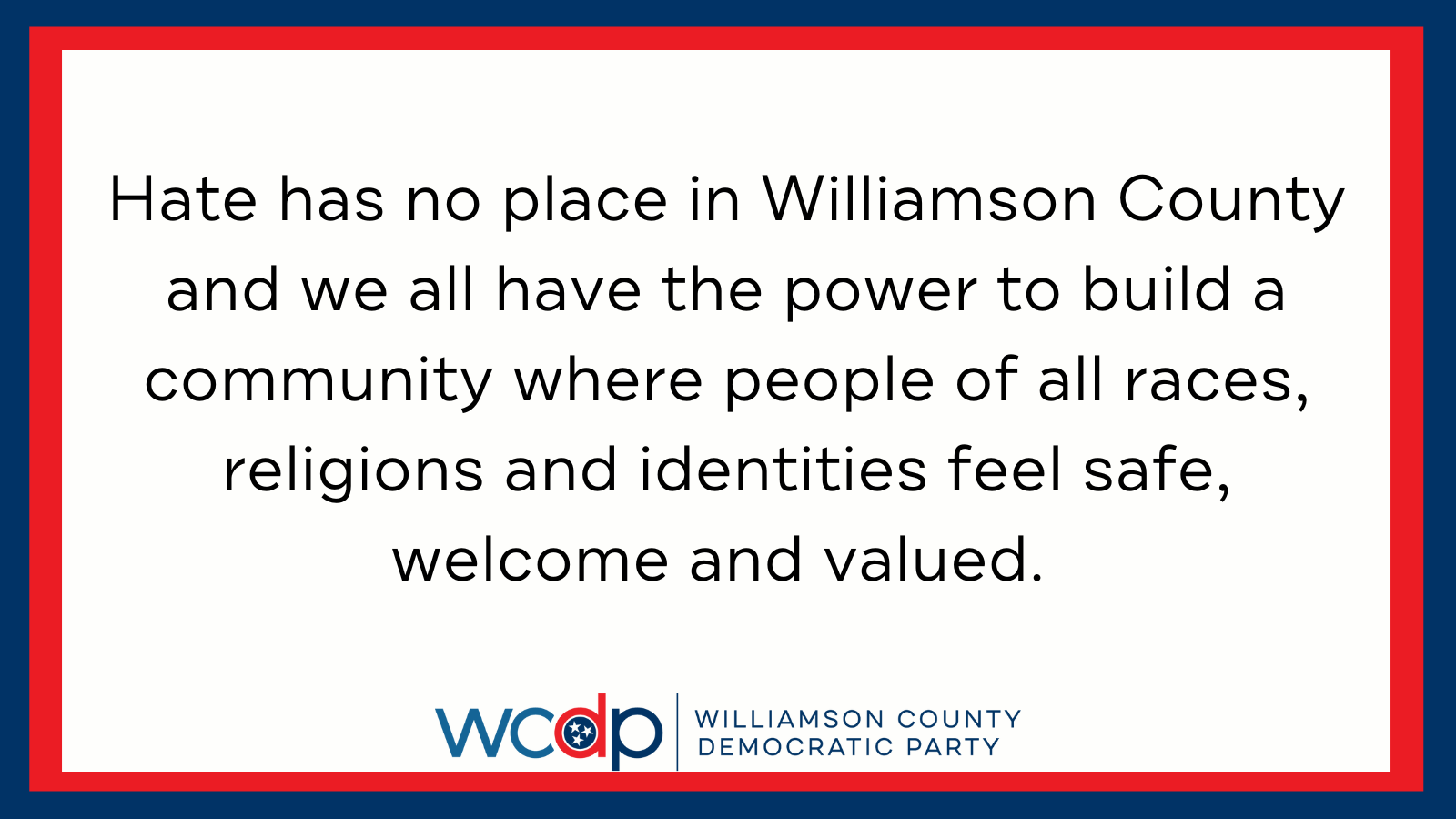 June has been a busy month for the WCDP as we supported several community events - Franklin Pride and Juneteenth - as sponsors and vendors, and celebrated our Democratic candidates with a community picnic. While we enjoyed these signs of progress in Williamson County, we knew that it would only be a matter of time before forces of ignorance and hate tried to push back.

Since the Pride Festival on June 4th there has been an orchestrated effort to prevent future events by flooding the Mayor of Franklin’s office with hateful complaints about the festival, performers and attendees. The people and groups behind these efforts want to silence our LGBTQ+ community and intimidate and pressure elected officials into denying permits for future events.

On Saturday, June 18th, while thousands of Williamson County residents celebrated the 2nd annual Juneteenth festival, a white supremacist hate group showed up to intimidate and terrorize the community. The group was dispersed by Franklin Police but as of this moment, not a single elected official from Franklin or Williamson County has condemned the presence of this group. So it falls upon each one of us to speak out. We should all be alarmed that a white supremacist hate group felt comfortable showing up in downtown Franklin and that they received honks of support from many of our neighbors.

We must contact Franklin Mayor Ken Moore, the City of Franklin Aldermen, Williamson County Mayor Rogers Anderson and Williamson County Commissioners in support of the Franklin Pride festival and urge them to condemn the hate group because their silence signals permission and acceptance.

Contacting our elected officials is the very least we can do, but we also must ask ourselves: what more could we be doing to further the cause of equity and inclusion in Williamson County?

The people and groups fighting so hard to prevent marginalized groups from being seen and heard in Williamson County are acting out of ignorance and fear. Celebrating the contributions and accomplishments of our Black and LGBTQ+ community, as well as listening with open minds and hearts to their experiences, enhances our community and makes us stronger. I am proud to be raising my children in Williamson County and we chose to move here for the schools, parks and community events that we ALL enjoy. Hate has no place in Williamson County and we all have the power to build a community where people of all races, religions and identities feel safe, welcome and valued.